New York City has been host to numerous super hit comedy movies, such as Ghostbusters and Home Alone. The artistic and lively aura of the city is an essential element in making it the most beloved city by the directors. Also known as The Big Apple, the city has countless sights and possibilities to shoot any type of movie, be it a romantic chick flick or a comedy movie that urges the audience to roll on the floor laughing. Set in the majestic Broadway or Wall Street, the busiest sight in New York, the range of comedy movies shot in this city is wide.

Let us explore some of the most fascinating and super hit comedy movies of all time set in New York City. This movie was an adaptation of one of the plays by Neil Simon. It captures a feeling that almost every person native to this city comes to experience at some point in his or her life. The movie was directed by Melvin Frank and had Jack Lemmon in the lead role. This comedy movie truly encapsulates the societal problems of a couple living on Second Avenue. The lead actor, Lemmon, is depicted to think that the whole New York City might be conspiring against him as he is unemployed due to a recession in the economy.

Lemmon, frustrated by his fate and the economic pressures, chases a mugger (Sylvester Stallone) in the streets of the city while taking the audience through the rollercoaster of events happening in between. This movie portrays the real-feel of being a New Yorker. Directed by Susan Seidelman and starring Madonna for her first ever movie, Desperately Seeking Susan was a big hit on the box office. It earned over 27 million dollars against the budget of $4.5 million and was filled with comedic instances that made the audience laugh for good. The movie depicts an intricate web of a story that intertwines the lives of two opposite characters in the funniest way possible. A bored housewife and a bohemian drifter come close over a few messages published in the personal column of a local newspaper.

With the aptly chosen and fitted attire of the two lead actresses, the movie matches the energy and fashion trends of the New York City back then. With poofy 80s hairstyles and pyramid jackets, the movie is an absolute love for the people who know the city in an out. Have you heard about how New York City is claimed to be alive and about round the clock all year? This movie is the truest depiction of how all this is true. Night shift launched the successful career of Michael Keaton. This comedy movie revolved around the nightlife of the city. Henry Winkler was also nominated as the best actor that year for his role in a comedy film.

Winkler is shown to play a timid morgue attendant, working in the night shift. However, the story takes a hilarious turn when Michael Keaton drops his “great” idea of starting an escort service. One of the most hilarious and true depictions of busy life in New York City is showcased in this 2006 comedy film, The Devil Wears Prada. Adapted by the novel of the same name by Lauren Weisberger, the movie starred Anne Hathaway and Meryl Streep. It earned a staggering 327.9 million dollars against its budget of 35 million.

It showcases the world of fashion and brands as it is in The Big Apple. Andy, played by Anne Hathaway, lands at an impossible job as the assistant of Miranda Priestly, played by Meryl Streep. As her job is portrayed as the one most people would kill for, Andy works as hard as she can to keep up with unrealistic, yet funny, demands of her boss. 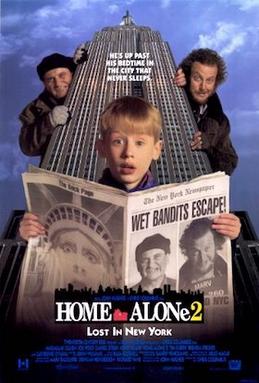 Probably one of the most-watched movies during Christmas, Home Alone 2: Lost in New York, is set in New York City (as the name says). The comedy film is penned down by Chris Columbus and produced by John Hughes. It is the much-awaited sequel of the Home Alone (1990). Grossing over 359 million dollars on the box office, the movie makes everyone laugh out loud.

The movie is set in New York City as Kevin (the lead character) is accidentally left behind in the city by his family during Christmas. The movie beautifully shots and presents the mesmerizing beauty and high spirits of Christmas in the majestic city of New York. The most famous locations in the movie include the Rockefeller Center and the original World Trade Center. Based on the novel bearing the same name, the movie Quick Change (1990), is set in the lively streets of New York City, particularly Manhattan and Queens. The film is the remake of the 1985 French movie titled Hold-Up starring Jean-Paul Belmondo in the lead role. The movie stars Bill Murray, who runs for his life after a bank robbery along with Geena Davis.

Their fate is met with the infamous craziness and twists and turns characteristic of New York City. Through the winding subways and the accidental encounter with a gangster, the movie is the best depiction of life in the big city.

The most famous locations that you will encounter in the movie include New York City Subway, John F. Kennedy International Airport, Times Square, the Empire State Building, and the Statue of Liberty. Set against the most celebrated annual event of the year, the New York City Marathon, this movie features Jillian Bell, Michaela Watkins, and many more. It is based on the story of a woman who swears to bring a change in herself and make improvements in her health. She decides to work hard towards shedding extra weight and unhealthy aspects of her life to begin a new chapter. She directs all her energies to prepare for the New York City Marathon.

Though the movie has been received with mixed reviews by both the audience and the critics, it is considered a light comedy movie one can watch for mood uplifting.

Night at the Museum is one of the best comedy movies set in New York City, depicting the relentless struggle of a single parent trying to normalize life for himself and his son. The movie shows Ben Stiller, the divorced father, bringing his life back on the track after finding a job as a night watchman at the New York City’s American Museum of Natural History.

While working, he notices that due to some magical powers of an Egyptian artifact, all the things in the museum come to life at night. The movie was a big hit among the kids as well. It earned about 574.5 million dollars on the box office against its budget of $110 million. Set in New York City, the movie is a rollercoaster comprising of a lot of emotions, including comedy. The male lead role in the movie, played by Martin Freeman, suffers from a neurological condition called cataplexy. Due to this condition, Charlie (Martin Freeman) faints whenever he experiences a hoard of emotions, especially joy. So, upon finding the love of his life, Francesca (played by Morena Baccarin), he directs her to his brother instead because of his condition. The 1984 supernatural comedy film Ghostbusters is set particularly against the lively multi-culture of New York City. It is not only a comedy movie but a legacy that undoubtedly became a part of the city’s culture. It has a cult following with a multimedia franchise. It starred Bill Murray, whose acting was mostly singled out as the best amongst all in the movie.

In short, the movie is based upon the wild dreams of three eccentric parapsychologists who launch a ghost-catching venture in the city. The movie is filled with hilarious dialogues and surely deserves the amount of fame it received.

Apart from the lively neighborhoods lighting up the city every hour of the day, New York is brimming with opportunities everywhere. From being the prime site for shooting a murder mystery to filming a romantic comedy in cozy little cafés and hideouts, New York City is one of the most exciting places to be.