This kind of architecture found its way to New York in the era of the 1930s. The trend of sky-high Art Deco buildings became immensely popular soon after it got launched in the city.

Buildings were designed to reflect the whole vibe of the uniform skyline. This idea of Art Deco skyscrapers was inspired by European style buildings. New York became the signature city of Art Deco architecture very early. And even though many of them are now demolished, some are still standing on their feet.

Following are the Top Art Deco-inspired buildings of New York:

Note: The following list is in no specific order. 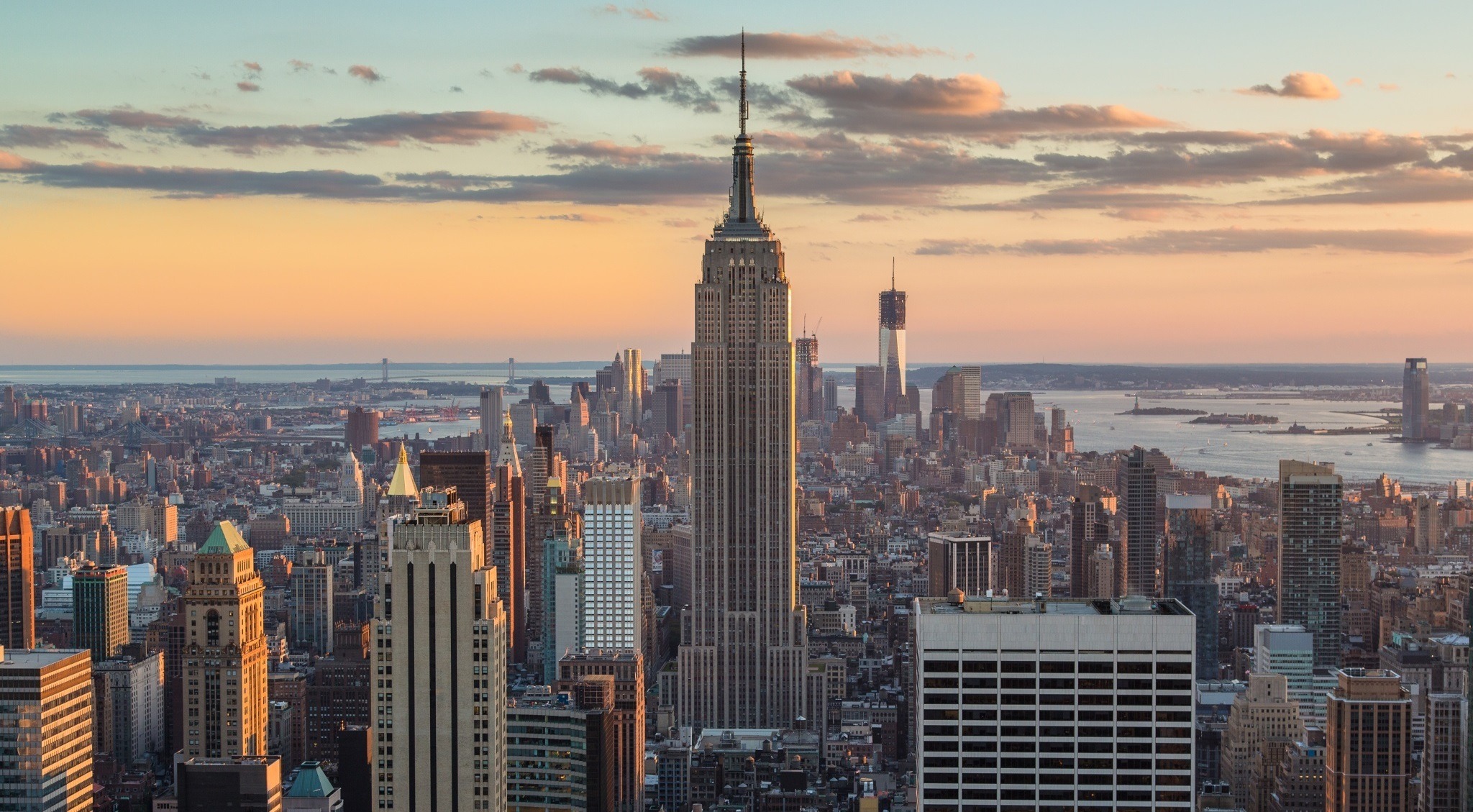 The Empire State Building has been the staple of New York for centuries. This building held the throne of the World’s Tallest Building for about 40 years. This place is known as the signature of the New York-style of architecture.

The building was built in 1931, and it has served the country pretty well ever since. It symbolizes the modernization and advancement of the city. A lot of people come to experience the magic of this beautiful structure.  It has been a tourist spot for decades. Travelers come and enjoy the views of New York from the top of this empire.

Interested in knowing more about this remarkable Art Deco style skyscraper? Check out our article on 10 Cool Facts about the Empire State Building. This beautiful building gained immense popularity when it was built in 1924. Back in the day when Madison Avenue was called “Silk district”, two brothers decided to change its trends of architecture.

This building was designed and crafted by the Cheney brothers. It brought a new perspective in the field of construction as it was one of the first Art Deco buildings of New York.

Until now, this place is strongly standing on its ground. This building is undoubtedly an iconic example of New York Art Deco architecture. It was designated both an Individual and Interior Landmark in 2011. This is not an ordinary building; it has served the United States for the longest time. This building, also known as 570 Lexington Avenue, was put together at a time when New York was still in its development process. It was built in 1929 to 1931.

The General Electrical Building is popular throughout the world because of its extraordinary Art Deco style exterior. From the colorful spirals to the amazing rooftop, this place has it all.

This building has played a crucial role in the development of New York. It helped the city to spread its radio industry and has maintained its popularity ever since. Famous for its beautiful entrance gate, Brooklyn Public Library (BPL) is situated in the heart of Brooklyn near Prospect Park. The building immediately caught the attention of everyone due to its amazing architecture, right after it was established in 1896. It is the fifth-largest public library system in the U.S.

The exterior of the building is designed with the classic limestone. The main gate is decorated with fifty-foot columns that are embellished with gold. These add a modern appeal to the overall building and make it stand out even more.

This building is still very famous among the locals of New York. Students from all over the city come and spend their days inside the library to explore literature. This library is appreciated not only in New York but across the globe.

Brooklyn Public Library is an excellent example of modern-day Art Deco building. It has been a staple of Brooklyn since day one. One of its kind, 70 Pine Street is counted as the last Art Deco style building to be built in Lower Manhattan before World War II. It is a 952 feet high skyscraper that was given the title of the World’s Third Tallest Building for a short amount of time, right after the Empire State Building and the Chrysler Building.

The beautiful skyscraper is now used for multiple purposes. It has a shopping center that is open to the general public. It was designed by the firm of Clinton & Russell, Holton & George. People from all over the world come to visit this stunning place. Located on the edge of the Central Park West Historic District, the beautiful building of The Eldorado is a wonderful example of New York’s Art Deco architectural style. This paired tower is a condominium apartment building. This place has won its popularity with all fair means.

The Eldorado, inheriting its name from the former El Dorado (a luxury elevator eight-story apartment block of 1902), is famous for its spectacular architecture and equally beautiful interior. The building stunningly features yellow terracotta that grabs attention instantly. In all its glory, this building stands super high, piercing the clouds of New York City.

Although the building has 30 floors, only the southernmost tower top is habitable. This tower top features a two-floor dual-terraced penthouse. The building was constructed in 1929 to 1931 and designed by Margon & Holder.

The local public of the city considers this place as a signature asset. Its wonderful apartments are loved and admired by its residents.

Famous in the whole world, the Chrysler building is one of the most important Art Deco buildings in New York. Piercing the sky with a height of 274 meters, this building is situated in the heart of Manhattan, New York.

It was the tallest building in the entire world when it was built. Anyone with even very little information of New York would be familiar with the importance and beauty of this building. It was constructed in the 1930s, and it left everyone in the state of shock the minute it got completed.

Since its completion, this building has become a tourist spot. People from all over the world come and visit this skyscraper that changed the architecture style of New York.

It was designated a National Historic Landmark in 1976. 30 Rockefeller Plaza is a 66-story tower made according to the Art Deco style of architecture that forms the centerpiece of Rockefeller Center. This complex received insane popularity because of its skyscraping height of 266 meters. From hotels to radio centers, this complex of Art Deco buildings has everything a person can imagine.

This center is located in midtown Manhattan, and it covers 22 acres of land of New York City.  It is insanely famous throughout the world and tourists come and visit this place from all parts of the globe.

The Comcast Building, formerly called the RCA Building and then the GE Building, does not only have a spectacular look, but it also provides visitors with a lot of facilities. The basement portion of the complex features an ice-skating rink that is loved by the public. People love to spend their holidays learning the art of skating in the human-made ice rink.

Another thing that this building is mostly known for is the grand lightning show. The plaza hosts this show on important occasions. People from all across the world come and celebrate their events in the vicinity of this building. Back in the days when Art Deco got popular, it was used as a symbol of posh life. It was seen as the marker of one’s wealth, and that started to divide the city into two different looks. But when this subway station got built, it removed the social status tag of the Art Deco and proved that this architectural style could be used anywhere.

This station got so popular because before it was constructed, Art Deco was only used in skyscrapers. This beautifully designed Art Deco structure broke this monopoly.

It features a long-curved window as the staple of this building, which was inspired by an ocean wave. The clean, sharp edges and uniformity made this building highly noticeable. Even though small in size as compared to most of the New York City’s Art Deco buildings, the Brill Building has made a statement in the world of architecture. It is situated in the heart of midtown Manhattan and consists of 11 floors only.

This building is famous for the fact that it has been home to different music companies from time to time. It has played the role of headquarters for a lot of famous music artists, including Burt Bacharach, Jeff Barry, Bert Berns, Bobby Darin, Hal David, Neil Diamond, and many more. It provided space for the all-time superstars, where they practiced and made art for their fans.

The exterior of this beautiful building features a pure black and gold vibe. It is decorated with gold architecture that is stunning to look at. This place has served the state of New York for a very long time.

Art Deco is not seen very commonly these days. But once it used to be the staple of New York City. Most skyscrapers that New York produced in its early days were inspired by this architectural style. It shined in all its glory for a very long time until it got disappeared after World War II.

When World War II ended, the Art Deco was nowhere to be seen. All the new buildings that were designed considered other sorts of architectures styles. But New York City has still preserved its remarkable Art Deco buildings. These are still considered as the historical pieces of the country.

This city produced a lot of art deco-inspired constructions, but the above mentioned are the most important ones. If you want to experience the real essence of New York City, you should definitely visit these amazing Art Deco buildings.