The Woolworth Building with 60 stories and 792 feet of height, was the World’s Tallest Building when it came into being in 1913. It remained so till 1930 when the Empire State Building was erected against which it was sadly, no match.

Frank Woolworth owned a business known by the name of “Five-and-Dimes” for which he required a new headquarters. He bought shares in his friend’s (Lewis Pierson), business and acquired a plot for construction at West Broadway and Reade Street, but he decided against it because of the prestige that a Broadway address provided

Woolworth, like all other businesses in New York, wanted his building to be the tallest in the world. New York was already up for the race and saw in a short period, the construction of many skyscrapers aiming to reach skyscraping heights. Frank Woolworth hired the services of architect Cass Gilbert in 1910. He worked enthusiastically with the designer to have the building achieve what he had wanted.

Cass Gilbert was a renowned architect who had worked for the McKim firm, designers of the glorious Morgan Library and Museum. He ensured a Gothic style for the building in the Beaux-arts design (link with Best Beaux-Arts Buildings in New York City), to reflect Woolworth’s association with the past.

The building’s design started humbly as a 14-16 story commercial building. Later, however, Woolworth desired to surpass the Singer Company building, and so Gilbert redesigned a 40-story building. In September 1910, a 45-story plan was revealed to the public.

Woolworth was looking for something more. It is known that he said:

“I do not want a building. I want an ornament for the city.”

For the construction of this ornament, Gilbert was called many times by the enthusiastic Woolworth, who laid in front of him the requirements and convinced him to change the design again and again. A fan of the businessman’s enthusiasm, Gilbert did not mind very much. In January 1911, Woolworth himself announced publicly in the New York Times that he had planned a building that would stand at 792 feet. It was going to be the World’s Tallest Building. Amidst changing designs and discussions, the construction of the building begun in November 1910. The building was complete in 1913, setting a record for speed that remained unmatched. Stretching over an entire city block between Park Place and Barclay Street, the building’s foundation was complete by August 1911. The steel framework was then erected. The building rose at a rate of one and a half stories every week. Simultaneously, the Terracotta was being laid out on the lower floors. Tons of steel were transported and used for the skeleton of the building. By April 1912, the work had begun on the tower of the building. The Woolworth building was complete by the end of 1912, only waiting to be officially opened. The total construction cost was estimated to be 13 million Dollars. Woolworth decided that the construction of his Imperial kingdom, as he called it, should be recorded for generations to come. He employed a photographer, Irving Underhill, to record each phase of the construction. The pictures can be seen in the gallery inside the building.

It was inaugurated in April 1913 with a grand dinner on the 27th floor of the towering construction. 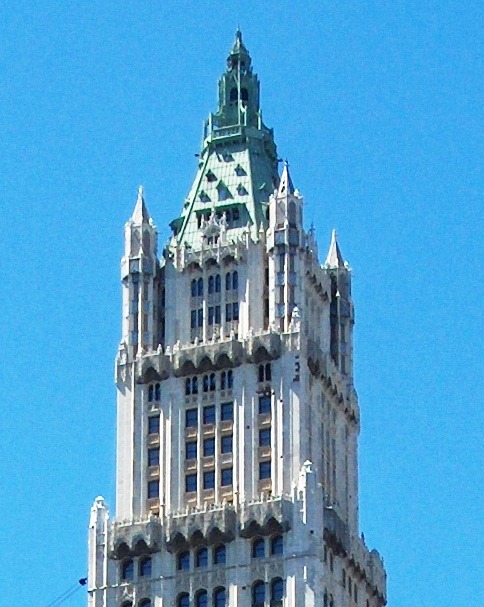 Being the tallest building in the world, it became a model in terms of structural strength and beauty for all the future skyscrapers to follow. Not only was the steel structure a role model, but the fine white terracotta façade with subtle furnishings and an interior, worth remembering.  The interior hosts a royal look, a cathedral-like lobby, with gilded ceilings – and luxurious interior is an embellishment to the superstructure. The building contained caricatures of the two important men. Woolworth has shown counting his dimes and designer Gilbert holding the model of his masterpiece in his arms.

The stained glass windows and their abundance for which Frank Woolworth had to convince Cass Gilbert, show the vision of Woolworth in architectural art and his aspiration to create a jewel for New York City. Gilbert was deeply inspired by the European style of building, and the reflection is visible in the gilded ceilings, staircases, and the Gothic-style architecture, featuring the Italian and French renaissance.

Woolworth had the building designed in such a way to allow maximum daylight to enter, hence the abundance of windows (about 2,843).

Only the entrance of the building is three stories high, having vaulted ceilings. The mosaic glass windows and the tiles imported from Greece and Italy are proof of Woolworth’s inspiration from European architecture. Clergyman, Dr. S. Parkes Cadman, who attended the opening ceremony of the Woolworth Building, famously described the building as “The Cathedral of Commerce.”

The building was open for renting and use in May 1913. By the end of 1914, 70 percent of the building was occupied. It had gained enough publicity even during its construction. The building contained all sorts of utilities, including a doctor’s office, swimming pool, a barbershop, and amazingly, its own power-plant. The Woolworth Company itself occupied one and a half floors of the building.

Like all superstructures, the Woolworth Building also went through renovations throughout history. In 1927, it was re-gilded and repainted at a high cost. The terracotta tiles were repaired and renovated from time to time. Staying in touch with modern requirements, automatic elevators and other modern gadgets were installed. The Woolworth Building was designated a National Historic Landmark in 1955 and was given the status of the official landmark of New York City in 1983. The restoration plan spanning over five years was announced in 1977, to undo the damage caused by New York’s climate.

In 1998, the building was sold to the Witkoff group. They planned various proposals, only to be cancelled due to the September 11 attacks.

Like all the giant buildings of New York, the Woolworth Building was also featured in many shows and held a special place in the heart of New York as it had remained the tallest building for quite some time. The building has hosted several films, including Enchanted, and Fantastic Beasts and Where to Find Them.

Gilbert’s gem still stands in all its glory. Unfortunately, visitors were restricted from visiting because of the 9/11 attacks. Post 9/11 conditions deteriorated the building, and it was unfortunate that foreigners and anyone visiting would be deprived of witnessing the interior of the building and celebrating Gilbert’s work.

However, in 2013, to celebrate the Woolworth Building’s 100th anniversary, it was opened for visitors, who graciously admired the building for all its aspects.

Today, the Woolworth Building remains closed for casual visitors, but for anyone who takes a tour, it commends the art and style of the skyscraper. All artists from the world remain inspired by the glorious and strong piece of architecture. Julian Huxley, the English scientist, described the Woolworth building as “a fairy story, gigantically and triumphantly come to life.”