The district of South Houston, also known as the SoHo, is an important part of New York City’s tourism. This neighborhood, which became a National Historic Landmark in 1978, is a living example of America’s transformation. Throughout the years, this area has been utilized for a lot of purposes. Hence, it now preserves a rich history that is popular worldwide.

The land of SoHo has witnessed the urbanization of New York. From the time when New York City was struggling to now when it has everything, this place has played its role cast-iron.

SoHo district encompasses more than 200 historical buildings that were constructed in the latter half of the 19th century of cast iron. This century is known for the innovation in terms of the usage of steel and the construction of skyscrapers while allowing the same traditional elegance as carved stone. Because of this innovation, you will see every block of SoHo having quite impressive architecture and portraying a sense of rich history.

If you are in New York and want to view the history and architecture of the SoHo, then you are in the right place. In this guide, we will help you get familiar with the area and how you can navigate it in the best way for a walking tour. Let’s get started.

People from all over the globe come to explore the streets of South Houston. There are many ways for the tourists to enjoy the environment of the area, but going around in a car is definitely not a good one. The most popular way to get to know this place is to walk around in its streets and explore the rich history and architecture. That is why tourists from a lot of different countries book walking tours of SoHo.

This way, they get the real deal on the history of the district in the best way possible. On this tour, you will find all the remarkable places and facts of SoHo highlighted. These places are famous for their versatile history, and thus, the area can easily grab the attention of everyone.

The walking tours of the SoHo cast-iron district provide the visitors with all the details they need.

SoHo is known as the house of Cast-Iron buildings. Back in the days, architects decided to use iron and steel to produce giant buildings. The metal was cheaper than stone, and it could be prepared in factories, so no heavy labor was required.

The main concept behind the all-metal building was to keep the window of expansion open. The workers would just unscrew the setup and expand it anytime they wanted. Even though now obsolete, these buildings were once a hallmark of New York.

Some of these buildings are still intact in their position. These draw major attention from the travelers and hence are famous worldwide. Included in every walking tour, some of the most important cast-iron buildings of SoHo are mentioned below: When the cast-iron buildings got popular in the field of architecture, builders started trying all sorts of experiments. This beautiful masterpiece was produced as a result of an experiment too.

Situated in the prime location of Green Street, the Gunther building is a 6-story tall building. The specialty of its construction is that it hides an optical illusion in itself. Each floor of this building is bigger than the other one, and thus this building looks a lot taller than it already is.

These days, the building is utilized for multiple purposes. The top floors have either offices or galleries while the ground floor features a private boutique. The visitors love to explore the building or otherwise, spend their time in the fashion boutique. This building might seem like a part of all the other historic buildings, but it’s not. This 10-story building was built quite long after the cast iron became old fashioned. It replaced a garage in 1954, and the builders decided to use metal for its construction. This decision was made in order to preserve the whole cast iron vibe of the neighborhood.

It is now a headquarters for the publishing company, Scholastic Corporation. It features eye-pleasing, attention-grabbing exterior and equally wonderful interior of the offices. A lot of tourists are seen taking photos and shooting videos outside this beautiful building. Covering a total land area of 90,000 square feet, this building was designed as a headquarters for The New Era Printing Company. But when it was completed, it was sold to represent the Butler Brothers Company, a mail-order business.

This amazing masterpiece of a cast-iron building had eight floors with the most balanced architecture. This building kept gaining attention because of its bright green exterior and the huge floor-to-ceiling windows. However, the building caught fire on December 29, 1927, which caused damage of about one million dollars. The fire burned for almost two hours before anyone noticed it – this caused the partial collapse of all the eight floors of the building.

This building has represented a lot of franchises. Its tenants included some fitness centers, fashion consultants, clothing designers, and the Swiss Institute. To generate the funding for his hospital, James H. Roosevelt, a famous estate holder, sold his house to create this building. It was designed by the very hands of Richard Morris Hunt, who was behind the design of the Statue of Liberty’s Pedestal, the Breakers in Newport, RI, for the Vanderbilt family, and the Fifth Avenue facade of the Metropolitan Museum of Art.

The unique thing about this building is that it is not painted over to mimic the brick made ones. It represents the whole concept of Roosevelt to maintain the originality of iron and showcasing it, as is.

This building is included in one of the last cast-iron buildings of New York City. Right now, it is home to several fashion boutiques and private shops. 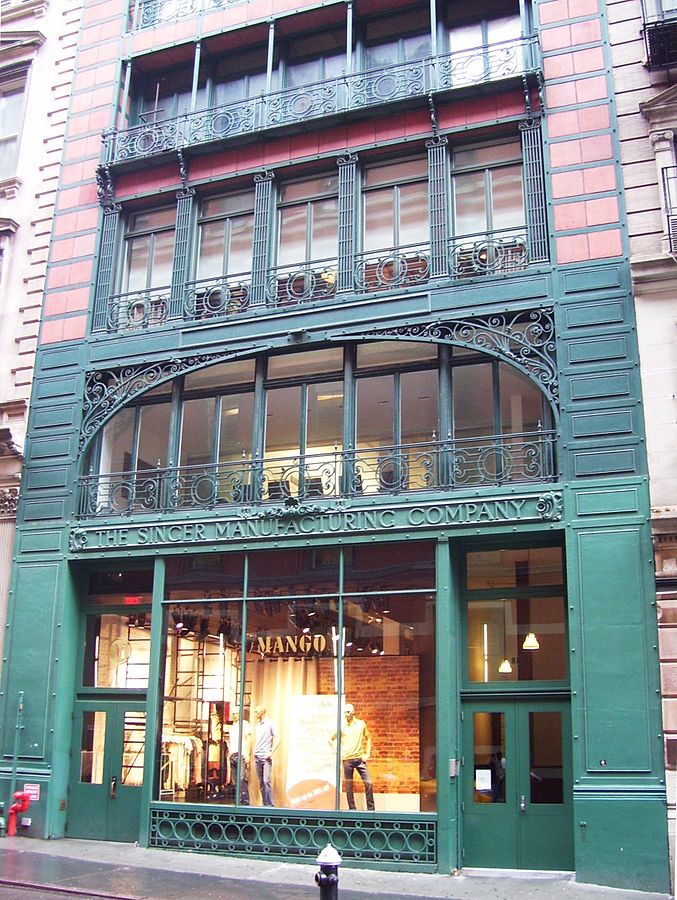 This amazing 12-story structure was built in 1903 to serve as the headquarters of the famous sewing machine company called Singer.

Known as the Singer Sewing Machine Building, this Beaux-Art building (Link with Best Beaux-Arts Buildings in New York City) was designed by Ernest Flagg. It complemented its surroundings with red-brick and green-painted ironwork. It featured long windows and the all-time signature cast-iron balconies. Its interior was carefully designed in order to provide optimum lights in the offices.

Currently, this place features some popular fashionwear shops and has been a center of attraction for tourists. People come and spend their time in the shops of the Little Singer exploring the fashion sense of New York This beautiful piece of architecture was built in the year 1891 for a company of dry-goods named Fleitmann and Co. It was a six-story building located at the corner of the infamous Broome Street. When the company moved from this building in 1912, this building was converted into apartments. Alfred Zucker designed it in the Romanesque Revival style.

This building became popular for tourists because of its unique exterior. This building features a pair of arches that stretch from the pavement to the third floor and is flanked by smaller entry arches. This highly incomparable five-story building was built in the year 1857. It was the headquarters of the famous good ware company called E.V Haughwout. This building caught attention soon after it was completed. The reason for all the attention was not only its beauty, but it got famous because it was one of the first buildings to utilize metal as the core structure. This building also featured the first-ever passenger elevator of New York and hence received immense popularity.

Right now, this building is being used by a lot of co-op tenants. Tourists from all over the world are seen exploring and shopping in the shops of this historic building.

Even though South Houston is mostly famous for its cast-iron works, this neighborhood has a lot of hidden gems as well. A walking tour to SoHo District is considered the best way to explore this place because of many reasons. One of them is that you can observe the interesting historical facts only by wandering in the streets of SoHo. Some of these important facts are mentioned below:

The cast-iron columns are hollow from the inside. When you knock them, you can feel the resonance on your hand.

You can easily differentiate between a real cast-iron building and a knock-off. All you need is a magnet and you can see if it attracts the metal or not.

Sneak Peek of the Reality

Even though the builders tried to disguise the metallic appearances of the buildings, you can still see some screws on the walls and columns.

The area where the buildings got expanded can be seen easily hiding under some decorative touch, such as stars made from the cast iron.

A single company, Excelsior Iron Works, produced cast iron in bulk to build these iconic structures. If looked closely, the stamps of the manufacturers can still be seen in some buildings.

The street signs of South Houston are different than the rest of the city. They are brown because they represent the old signs of the city.

The South Houston has surely kept the history of New York alive that is seen clearly in this neighborhood. Above mentioned places and facts are only a few of the many interesting things that are featured in the tour.

Travelers from all the corners of the world come and visit this place. The tours of the SoHo are one of the major parts of New York’s tourism. This land has definitely played its role in the development of the country. Therefore, it deserves all the appreciation and popularity.