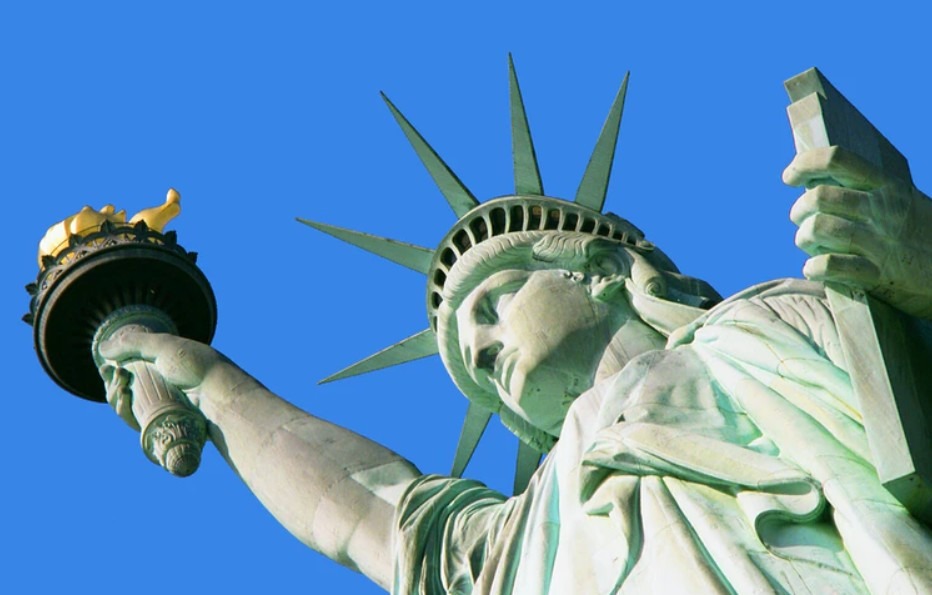 Throughout history, artists across the globe have shaped various materials such as marble, bronze, wood, and steel, into fascinating forms, resulting in many iconic sculptures we have today. Not only do these figures please our eyes, but they serve as storytellers that convey many important messages from the past’s culture and society.

New York City is home to many of these sculptures, with lots of them dotting the city. Amidst the hustle and bustle of the city, many of these works of art sit on many of NYC’s locations, just waiting to be appreciated by residents and tourists alike. Don’t fret, as we’ve listed the famous sculptures found in New York City that will make you want to visit each one of them. Renowned as an insignia of freedom in the United States, the Statue of Liberty is a work of art designed by French sculptor Auguste Bartholdi. It was the French government’s gift to the U.S. in commemoration of the Franco-American alliance and friendship.

The massive neoclassical sculpture was made between 1875 to 1884. Standing 151 feet and weighing 225 tons, the copper statue was dismantled and shipped to the U.S., arriving in New York City on June 17, 1885, aboard the French frigate, Isère.

The Statue of Liberty was reassembled and erected on an American-made pedestal on Liberty Island. It was dedicated on October 26, 1886, and listed as a National Monument in 1924. Known for its green patina, it only appeared on the famous sculpture after the copper oxidized in the 1900s. New York City’s Central Park may be home to around 30 statues, but perhaps the most iconic for NYC’s children and kids at heart is Spanish-American Jose De Creeft’s Alice in Wonderland. Beloved by many generations since 1959, the sculpture features Alice sitting atop a giant mushroom, surrounded by the other characters, the Dormouse, the White Rabbit, the Cheshire Cat, Dinah the cat, and the Mad Hatter. George Delacorte donated the sculpture in honor of his wife, Margarita, and as a gift to the kids living in New York City. In commemoration of the 1970s Stonewall Riot that sparked the ensuing gay rights movement, sculptor George Segal was commissioned to create the “Gay Liberation” monument in 1979. It features male and female same-sex couples, seemingly in intimate conversations. Due to funding issues and its controversial nature, it was dedicated more than a decade later in 1992. The Gay Liberation monument is situated near the Stonewall Inn in Christoper Park. Created by Sicilian artist Arturo Di Modica, he illegally dropped off the “Charging Bull” in front of the New York Stock Exchange in 1989. Di Modica said that the iconic 7,100-pound bronze sculpture represents the can-do spirit of the American people and New Yorkers in particular, after the wake of the 1987 Wall Street crash. The NYPD removed and relocated the “Charging Bull” to Bowling Green, which became its permanent home and where it became a famous tourist attraction. In 1971, German artist Fritz Koenig was commissioned to create “The Sphere” to serve as the centerpiece for the plaza located in front of the original, sleek, and modernist World Trade Center twin towers. During the 9/11 attack, the 25-foot bronze sculpture miraculously survived, popping out of the rubble, incurring only damages and not completely destroyed. Battery Park became its new home from 2002 to 2017, before it was relocated again to the newly-opened Liberty Park. A masterpiece of one of the famous artists from New York, Gertrude Vanderbilt Whitney, the Inwood Monument is a World War I memorial that commemorates the Navy, Army, and Marine servicemen that lived in the communities of Washington Heights and Inwood but fought and perished during the global conflict. Dedicated on Memorial Day on May 30, 1922, the bronze sculpture is situated in Mitchel Square Park, depicting three soldiers helping each other during the battle. Designed by Gilmore David Clarke,” The Unisphere” is one of the last two surviving pieces from the 1964 New York World’s Fair. Unveiled during the opening of the Fair in April 1964, the world’s largest globe-style stainless steel sculpture represented the start of the space age and became the theme symbol of the event. Listed as a designated landmark in 1995, “The Unisphere” is situated in Flushing Meadows–Corona Park, which also hosted the 1939 New York World’s Fair. Rockefeller Center’s “Prometheus” is one of the most photographed monumental sculptures in New York City. Created by renowned American sculptor Paul Manship in 1934, the gilded bronze sculpture depicts the Greek mythological figure, Prometheus, harboring fire to mankind. The statue stands 18 feet (5.5 meters) and weighs 8 tons, and is the major attraction in the Lower Plaza. Another iconic sculpture in Rockefeller Center is the Art Deco statue “Atlas,” featuring the Greek mythological figure carrying the heavens on his back. Created by Lee Lawrie in 1937, the Atlas sculpture stands 15 feet, but the entire statue measures 45 feet, making it the largest in the famed business complex. Atlas has become the insignia of the Objectivist movement that began in 1950. The bronze sculpture situated on Federal Hall’s front steps was unveiled in 1883 to celebrate the first inauguration of the country’s first president and founding father in 1979. At that time, the Federal Hall served as the United States’ capitol building and Washington took the oath of office approximately on where the John Quincy Adams Ward-made statue now stands. Situated at the heart of the Columbia University campus in Manhattan, the “Alma Mater” is a bronze sculpture of the goddess Athena. The status is a personification of the allegorical Latin phrase, “alma mater,” which suggests that schools bestow essential intellectual nourishment to their students. Created by Daniel Chester French, the sculpture has been closely associated with the university’s image, being one of the most historic and prestigious educational institutions in the United States.

That’s the rundown of some of the famous sculptures found in New York City. The sprawling city has many more sculptures awaiting for you to see. So, check these out and continue exploring what other symbolic sculptures this amazing city has to offer and be captivated with the beauty and history of each masterpiece.